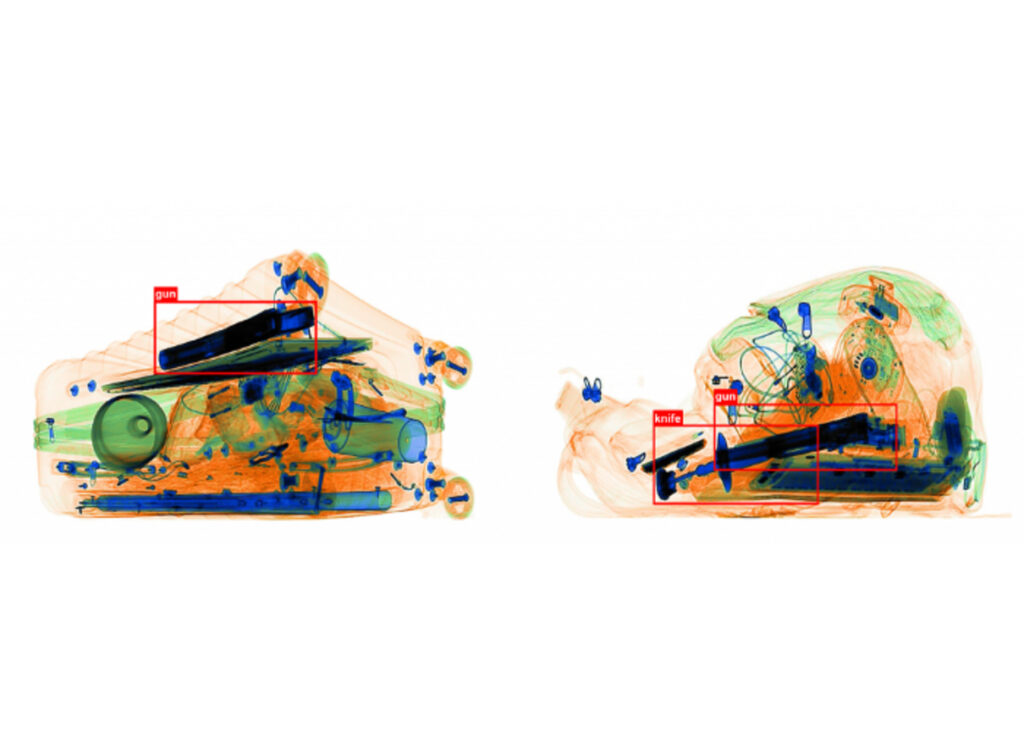 Neural Guard produces automated threat detection solutions powered by AI for the security screening market. With the expansion of global trends like urbanization, aviation, mass transportation, and global trade, the associated security and commercial challenges have become ever more crucial. In this blog, we will talk about how researchers and developers at Neural Guard build technology that detects specific, high-risk items in CT and X-Ray imagery by leveraging cutting-edge artificial intelligence algorithms to analyze a security scanner’s output.

The team at Neural Guard faced the challenge of building, optimizing, and maintaining deep learning (DL) models that recognize multiple unique objects found in high-resolution X-Ray imagery. As opposed to processing instantly readable, text-based data, imagery analysis requires incredibly large data sets and models that take into account unusually extensive potential variations in each image as it is identified, tagged, and fed into the model. Additionally, each X-ray or other detection machine has unique, subtle deviations in its output that require attention to achieve high-quality detection results. Even more challenging is the fact that new samples — uniquely shaped knives, rare gun models, home-made weapons — are constantly added into even “mature” models, refining them even further. In short, Neural Guard’s solution requires an ongoing, data-heavy experiment process.

From a business value standpoint, Neural Guard had two key objectives for its detection system:

Naturally, managing this matrix of data sets and models demanded a powerful management platform. It had to be scalable enough to handle the growing data, the vast array of thousands of machines it is installed on, and the always-expanding collection of models as they move through the pipeline to be documented, reproduced, compared, shared, stored, and easily searched. And all this, ideally, without requiring substantial DevOps effort, or a data scientist’s own hands-on involvement to manage the logistics of these processes.

While creating object detection models was important, it was vividly clear that the most important piece of the puzzle was overcoming the AI data management challenge: To effectively and accurately process huge datasets and prepare the highest quality datasets for continuous training of thousands upon thousands of ever-changing object detection models.

As the first step, Neural Guard set out to choose the best development framework for their needs. There were three compelling reasons why PyTorch was the best choice for their needs:

The next step for Neural Guard was to design a plan for an automated pipeline that would be able to:

At the heart of this challenge lay the ability to create a system that would enable Neural Guard to “take ownership” of its data at a very granular level, both in terms of being able to analyze the data at hand, and also manipulate it. Effectively, they sought to set up a debiased, optimized training data set for each machine and object.

As their solution architecture began taking shape, Neural Guard realized that they would need to rely a lot on specific software development to build this pipeline, including — among other things — building their own human-labeling management system. But they also realized that building the core data management piece is a gargantuan task. Luckily, they knew about Allegro Trains, the experiment management, ML-Ops, and the data management platform. It was the only commercial platform they found that would be able to deliver the data management capabilities they were looking for. With all this in mind, Neural Guard set out and built this state-of-the-art, production-grade data pipeline for building, maintaining, and serving multiple object detection models, all on top of Allegro Trains.

“Using Allegro Trains data management features proved to be an invaluable tool for us,” explains Raviv Pavel, CTO for Neural Guard, “With it, we were able to understand our data and data requirements on a much more profound level. One major factor we were able to accurately measure, for instance, was how much data do we actually need. It turns out that when we can track and compare multiple experiments easily, including what data went in, we actually did not need as much data as we thought. This was a huge cost saver for us.”

Critical to a scalable, continuously learning pipeline leveraging multiple feedback loops, is an ability to version data at a very granular level. Additionally, a system that can fetch the relevant version of the subsets data, pairing new data with existing datasets, in a balanced manner per model, is required. With Allegro Trains taking care of version logging and fetching the data, Neural Guard focused only on bringing more data in and evaluating its benefits. “The ability to truly track what each dataset contributed to the model performance was very powerful,” says Pavel. “We were able to focus solely on analyzing the results, and not spending time on building an infrastructure that would support the process.”

Neural Guard had unique needs, such as non-standard metrics for data analysis and others. No single platform can provide everything, and Allegro Trains’ flexible, robust and easy-to-integrate SDKs and APIs became very useful. “Using Allegro’s SDK made tedious work like updating metadata on images into a simple task,” explains Pavel. “It was another important component of our system that we didn’t have to design and then to build on our own — and it became indistinguishable from other native parts of our system.”

This integration was especially helpful when using Allegro AI’s dataset management with the experiment manager to access required data; Neural guard could leverage the same codebase, and use the UI to quickly change the data used. Add to that the fact that Allegro Trains also manages local data caching (including prefetching the data and ensuring that the latest version is always present, without any manual work), and it confirmed for the team the wisdom of the decision to choose Allegro Trains.

A final aspect that Neural Guard had to take into consideration was model deployment. Neural Guard deploys PyTorch-based models on various edge devices on Intel and Nvidia devices as well as API endpoints on servers. The world of security presents its own rigorous regulations, limitations, and restrictions, so it was clear to Neural Guard that model deployment had to remain safely on-premise at their customers’ sites. This reality introduced a host of specific challenges, including permissions and versioning. Neural Guard leveraged Allegro AI’s model management to easily identify the best performing model, then fetch and distribute it to their custom-built model deployment solution. To achieve this, the team built an identity and permission management system, complete with a deployment and update pipeline, custom-tailored to their service’s workflow.

By building a solution with PyTorch and Allegro Trains Neural Guard was able to get:

All of this simply a result of using Allegro Trains as a core component in its training and deployment pipeline.

“For a company whose key value proposition to its customers is the quality of its AI detection algorithms at a competitive price point, the most fundamental key to success is building an automated, high-quality scalable data pipeline. Allegro Trains catapulted us in what we have been able to achieve in both the time and resources needed,” concludes Pavel. “There is currently no comparable commercial solution to Allegro Trains out there.”

We look forward to working with you, to pursue our goal of a safer and more secure world.

DROP US A LINE